Bacon painted out the ball in the foreground and replaced it with a patch of white with randomly-applied Letraset, like a fragment of discarded newspaper. More fundamentally, in April 1975 he introduced the hunched ape-like form (with a cormorant’s head), top-right, resembling a sculpture seated at the junction of two upturned pedestals or soles. Paradoxically, this juxtaposition might be thought to initiate a possible alternative narrative, albeit a particularly opaque one. Francis Bacon: Catalogue Raisonné, 2016, p. 1068

This image is digitally printed on Premium Quality 250 gsm graphic art paper with a matte finish. 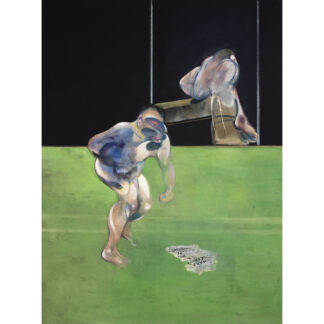